Cleaning Up After a Leak 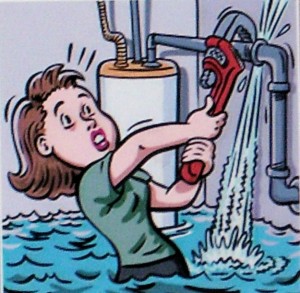 When the plumbing in your home develops a leak it can mean a big mess. I know because that has happened to me several times over the years. Each time there was a new kind of mess to clean up. Thankfully I had the internet and I was able to get some help. I looked around at so many different plumbing sites, and the key thing I was looking for was just someone who would be reliable and help me to get my life back in order after the problem was fixed. There were very few sites who showed what skills and qualifications their plumbers had. One example I found was on this website: www.vandammeprojects.com/mains-connections but unfortunatley for me they are based in Australia.

Here are some issues you may face when leaks spring up in your home:

The bathroom is a hot spot for leaks. There is just a lot of plumbing going on there! If there is a pipe you can think of in the bathroom than my home has had a leak there. I don’t know if the warrantee ran out or what, but what can go wrong does go wrong at my house.

The first bad spot to face was the bathtub faucet leaking. It was just a constant drip dripdrip that drove me crazy and hiked up my water bill. I figured it would be easy to fix; just a new washer in the fixture. I had done it before in my old home, so why wouldn’t the same thing work in my new home? Of course, things did not work out that easily. The faucet was too old to fix and had to be replaced. It was not just a matter of screwing off the faucet and shoving a new one on. Oh, no that would have been too simple. Instead the tile around the faucet had to be broken and removed, the wall behind that had to be cut out and some of the piping even had to be replaced.

What a hassle! After the plumber had replaced the faucet and left I was staring in horror at my ravaged bathroom. Where would I shower now? Upstairs I suppose. Thankfully I was able to get the bathtub redone and back in good condition but it cost me a pretty penny. For one leaky faucet!

Another leak that sprang up in the bathroom was under the sink. The cabinet around the sink hid the evidence for a while, but when I pulled out a dripping wet towel I knew something was wrong. The hot water hose that connected to the bathroom sink had rusted and corroded over time. Now it was leaking but I couldn’t get it off to replace it. Another call to the plumber and my sink was fixed. I was able to catch the leak before it did major damage to my cabinets, but there was still some warping damage done. Not to mention all the towels that needed to be rewashed and dried. I am so grateful that we have plumbers in the area that on hand for emergencies! It is likely you will find a plumber like this in your area, we have found one example of a website who offer similar services to point you in the right direction – onetorontoplumbing.com

The final straw and biggest mess came due to a major mistake on my part. One Fourth of July I left a single firecracker in the bathroom. There are, of course, matches in the bathroom as well to light the scented candles. That combination proved disastrous when a person I shall not name decided to light the firecracker before thinking about where he would throw it. Into the toilet it went and a moment later the crack boom of shattering porcelain echoed through the house.

You would think that a crack in the toilet wouldn’t cause that much of a mess. Well, you would be wrong. That auto refill feature is a pain in the neck. Just for your information you cannot patch a toilet either. Glue and waterproof tape do not work. We ended up having to take out and replace the whole toilet but not before water had gotten everywhere: in the crevice between the bathtub and the floor, under the cabinets, and out into the bedroom carpet.

It stunk. It wasn’t even dirty toilet water and it still stunk. You can imagine the smell. Gag. I called out the big guns and had it all professionally cleaned. I was not going to risk smelling that stink for any longer than was necessary. Getting it out of the carpet was my number one priority as the carpet can hold on to a lot more liquid than you would think.

Moving on, the kitchen is another leak hot spot. My leak happened under the kitchen sink. Once again the cabinets hid the leak until it had become a disaster. This time the stink factor was the tip off. The faint whiff of something off turned into the stench of rotting within a day or two. We finally found the culprit by literally sniffing it out. Removing the sticky, stinky, and wet items from under the kitchen sink revealed that the connection between the garbage disposal and the drain had gone awry. Smelly, rotten, and wet food particulates sprayed across the entire area every time the dishwasher or disposal ran. The cabinets had softened to a mushy pile of pressed wood, rotting through with an unbelievable stench.

Again the professionals were called in. I can’t even imagine doing the clean up on that myself! Fully gloved and masked, they tore out that section of the cabinets and cleaned the cement beneath. The pipes had to be fully replaced, of course, and I bellied up for a new disposal while we were at it. After everything was in ship shape again the cabinet was replaced and we had our nice, scent free kitchen back. Moral of this story is to catch the leak early! Then you won’t have to replace everything like we did. If you do find a link just look up a company in your local area. For example, just searching ‘Plumbing company London‘ can give you hundreds of results.

My horror story about the garage is not as bad as a friend of mine’s. She left on vacation for two weeks and came back to find out her hot water heater had exploded and her entire garage was covered in a thick layer of mold. Ew!

My problem was not due to the water heater, though I know they can be a big leak danger. Mine was due to the air conditioning unit located above the garage. One hot summer the drainpipe got clogged up and the drip pan could not handle the overflow. Water dripped from the garage ceiling and turned a flat ceiling into a threatening bubble of dampness. Thankfully I was able to get everything out of the way before it collapsed onto the floor.

After getting the air conditioner repaired I called out cleaners to make sure the water damage had not spread to more of the ceiling and to clean up the parts of the carpet that had been damaged due to the water. I also had to get a Garage Door Opener Repair too as the water had affected the motor but it was easy to fix. I did not want to get into the fiberglass insulation either. After replacing the ceiling everything thankfully went back to normal.

As you can see, leaks can cause a lot of damage to your home. Even small ones. You need to take water damage seriously as it can lead to all kinds of health risks and complications. Call in professionals to help you with clean up and make sure the job gets done right.

Ken holds a master’s in business leadership from Upper Iowa University and multiple bachelor degrees from Grand View College. As president of morningsidenannies.com, Ken’s focus is helping Houston-based parents find the right childcare provider for their family. When he isn’t working, he enjoys spending time with his three children and his wife.